Talking books with an author as well-versed as Ad Hudler was a grand delight!  His easy and engaging style endeared him to all of us.  Afterall we loved his baby, Man of the House!  A great book to talk about gender identification.  In this day and age, there is much confusion over the roles of men and women at home and in the workplace.  Men are doing things traditionally done by women and  vice versa.  Ad bring this out vividly through the character of Linc Menner, at stay-at-home Dad.  In Man of the House, everyone is in transformation Linc is wondering how he compares to the construction men who are remodeling his home, the daughter is entering puberty and the CEO wife is dealing with hurricane preparations for a hospital.  And in the midst Linc is being stalked by his daughter's teacher.

Ad did confess that about 70% of the book is based on his real life as he is a stay at home Dad.  Which is why the book tastes real.  We highly recommend this book for your book club or personal enjoyment.  Perhaps you too will be lucky enough to meet up wtih Ad and meet a manly Man of the House.

We had several visitors to our open meeting at the library, hopefully some new recruits to the Pulpwood Queen Book Club world.  It was good to see Pam Carter from the Lafayette PQ's who drove over to meet Ad and chat with us about all things book club.

Thanks to the combined efforts of the members it was an enthusiastic meeting with lots of questions and discussion.  Queen Lea found a wonderful fleur de lis apron to accompany the Marshes to Mansions cookbook we gave Ad in appreciation for his including us on his Tailgate Tour.  A patron of the library Ruby O'Brien won the pink hammer door prize which was promptly autographed by Ad.  Queen Allison led a wonderful discussion of the questions from  the book.  Queen Tracey was fabulous in coming early to oversee the setup and our thanks go to Marilyn Bonnette, Librarian for her assistance.

Afterward we took Ad to our favorite eating place for a Darrell's Special which he loved! 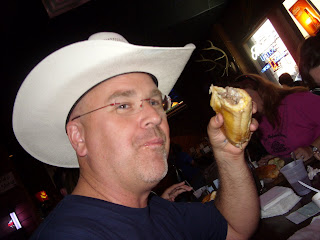 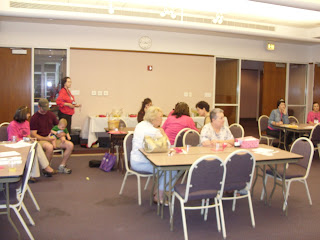 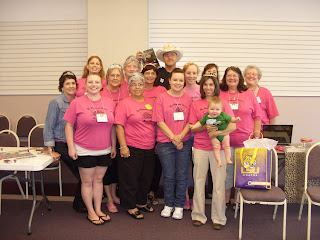 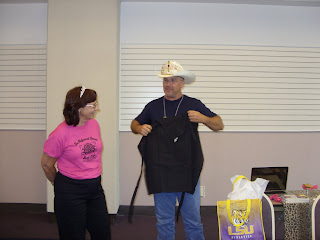 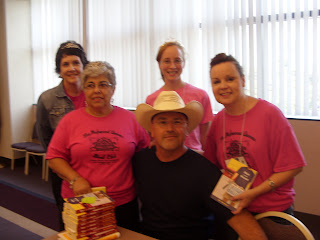 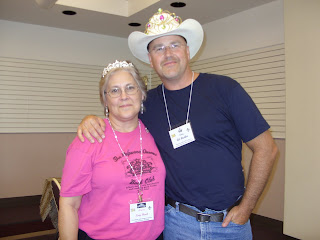 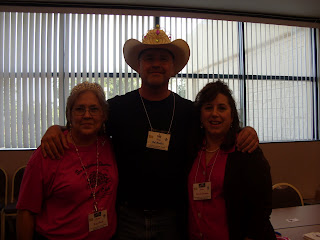 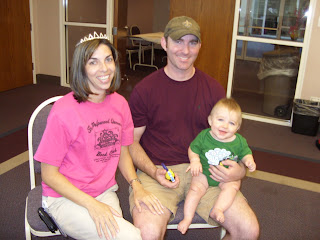 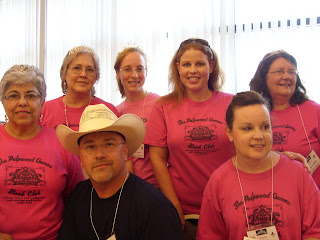 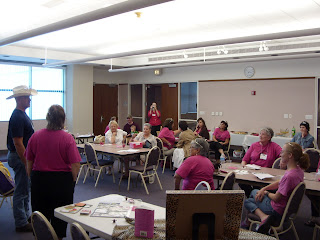 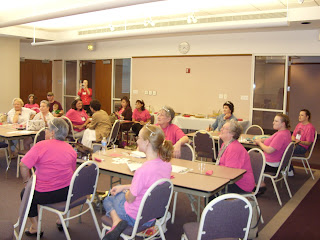 Catch us in the American press marquee!

Check in today's paper, the Marquee, for the write up regarding Ad Hudler's visit!  http://www.americanpress.com/lc/blogs/wpEntertainment/?p=1062

Thanks to our Queens Erin, Allison, and Rachel for all their diligent efforts to make this happen!!
Posted by Kay Huck at 12:08 AM

The Pulpwood Queen's Book Club: The Pulpwood Queen Shares Photos of Author, Ad Hudler on Tailgate Party Tour with the Queens!
Thanks Kathy for recognizing our chapter! We are just doing our part to support books, authors, and literacy. Ad Hudler will be here on Wed July 14 and we are opening our meeting to the public so everyone can have the opportunity to benefit from reading! The local library is co-sponsoring this event and promoting it with their summer reading program. We are all working to encourage literacy.
Thanks Kathy for giving us the opportunity to connect with some wondrful authors and great people!
Posted by Kay Huck at 2:46 AM

Pulpwood Queens, you are in for a grand evening with Ad Hudler to talk about books and all things literary and the theme of his latest book Man of the House and gender identification.  How many times as I was reading this book did I think, he's nailed it, he really understands and communicates well, what it means to be a stay-at-home caregiver.  What I found insightful was the passion he has the main character, Linc Menner, put into his role of man of the house.  Candlelight dinners, extravagant dinner parties, great care in finding the perfect home accessories, due diligence in interactions with teachers and principals.  Just all around Perfect!  Then as the house is remodeled, Linc also begins a remodeling job on his character.  Hilarious to the point of laugh out loud, a totally enjoyable book.
AND not only are we reading this book for our July 14th meeting, Ad has us a a stop on his Tailgate Tour!  To celebrate our good fortune we are opening up our meeting to the public and joining with the Calcasieu Parish Public Library to host this event.
So put grab your tiara, your hot pink T-shirt and Man of the House, to meet up at the Central Branch Library corner of Claude St and Ernest St in Lake Charles on July 14 from 5 - 7:30 pm!
We are asking each member to bring 2-3 dozen cookies/brownies for refreshments.
Posted by Kay Huck at 3:52 PM

Message from Kathy Patrick and Official book List for 2010

Thought you would be interested in seeing the rest of the official book list for 2010 although we have selected all our books for the year.  I have highlighted those in red.   Kay

1) First, I have to have read the book! Most of these books are sent to me by the authors themselves, a family member or friend, or a publicist. Send a book for review to:
Beauty and the Book
608 North Polk Street
Jefferson, Texas 75657
I check out all books personally that are sent to me but due to massive amount of books, I cannot return the book to you.

2) The book must be well written. It does not matter to me if it is self-published or published by one of the major publishing houses, or somewhere in between, but if it has not been properly edited, sorry, I will have to pass.

3) The story must be from a viewpoint that I have not heard before, a good example is "The Sunday Wife" by Cassandra King. This story was written from the view of a minister's wife. Growing up right next door of the parsonage of my church, I felt that the minister's wife never really had a voice, I found that book fascinating and subject for discussion which brings me to my next point of criteria.

4) The book must be discussable. I read a lot of books that are great books, uplifting stories that make me happy, to books that give great information, such as cookbooks. But if there is not a conflict or a story to discuss, I'll save those great reads to be featured more at perhaps the two book festivals I run. The twelve books of the year that I select must be ones that's story lends itself for discussion because unless you have a conflict, not much to say about a book at a book club meeting other than, "We loved it!" I have found the best books to discuss are often times the ones that certain book club members hate. The meetings get really lively!

5) I love to select books from first time authors or authors who perhaps have never really received the proper attention for their book or books. Somebody has to champion the first time author and I get a big thrill from discovering those authors who a good deal of the time go on to super stardom. Some of those books that we have selected that have are: Divine Secrets of the Ya-Ya Sisterhood by Rebecca Wells, The Glass Castle by Jeannette Walls, Eat, Pray, Love by Elizabeth Gilbert, Same Kind of Different as Me by Ron Hall and Denver Moore, The Help by Kathryn Stockett, oh, I could go on and on.

And to help get our Official Pulpwood Queen and Timber Guy Book Club Selections get the word out in a really big way, I now post The Pulpwood Queens' TOP TWENTY BESTSELLING Books based on the sales from my Hair Salon/Book Store, Beauty and the Book, see May 2010 list below.

Perhaps, you too will join our book loving party and crown yourself Queen or King! We are dead serious when it comes to authors, books, literacy, and reading but we at the same time believe that, if it's not BIG TIME FUN, we aren't doing it!
For more on joining The Pulpwood Queens and Timber Guys, please go to our Official website, www.beautyandthebook.com and click on Pulpwood Queens! Email me any questions at kathy@beautyandthebook.com and I will be more than happy to help you!
Welcome to the Wonderful World of the Pulpwood Queens!
Tiara wearing and Book sharing,
Kathy L. Patrick
Founder of the Pulpwood Queens and Timber Guys Book Clubs, the largest "meeting and discussing" book club in the WORLD!
"where tiaras are mandatory and reading good books is the RULE!"
www.beautyandthebook.com
http://www.pulpwoodqueen.com/

What Difference Do It Make? By Ron Hall, Denver Moore, & Lynn Vincent
Splinters – The Sweetheart of Prosper County by Jill S. Alexander
Pinecones – Poppy's Pants by Melissa Conroy
February – The Mighty Queens of Freeville: A Mother, a Daughter, and a Town that Raised Them
Bonus - Saving Cicadas by Nicole Seitz
Sweet By and By by Todd Johnson
The Girl Who Chased the Moon: A Novel by Sarah Addison Allen
Splinters - The Cupcake Queen by Heather Hepler
Pinecones: Evolution of Calpurnia Tate by Jacqueline Kelly
March – The Lakota Way by Joseph Marshall III
Bonus – Do-Over by Robin Hemley
Splinters: The Adventures of Sherlock Holmes by Arthur Conan Doyle
Pinecones: The Magician's Elephant by Kate DiCamillo
April – The Lacuna by Barbara Kingsolver
Bonus - The Boy Who Harnessed the Wind by William Kampkamba with Bryan Mealor
Splinters – Alice in Wonderland by Lewis Carroll
Pinecones: The Secret World of Walter Anderson by Hester Bass
May – Spoon: A Novel by Robert Greer
Bonus – Half Broke Horses by Jeannette Walls
Splinters – Shiver by Maggie Stiefvader
Pinecones – The of Nicodemus Annie by Angela Bates
June – Cutting for Stone by Abraham Verghese
Bonus – The Mountain Between Us by Charles Martin
Seeds: A Memoir by Sasha Vukelja, M.D.
Splinters – Eli the Good by Silas House
Pinecones – Jenny & the Cat Club by Jenny Linsky
Or Notes from the Dog by Gary Paulsen
July – The Recipe Club: A Tale of Food and Friendship by Andrea Israel & Nancy Garfinkel
Bonus – Man of the House by Ad Hudler
In Pursuit of Other Interests: A Novel by Jim Kokoris
29 Gifts: How a Month of Giving Can Change Your Life by Cami Walker
Splinters - Outcasts United by Warren St. John
Pinecones – Piper Reed: The Great Gypsy by Kimberly Willis Holt
August – Zeitoun by Dave Eggers
Bonus – Not Between Brothers: An Epic Novel of Texas by David Marion Wilkinson
The Year Before the Flood by Ned Sublette
Yazoo Blues by John Pritchard
Splinters – Homer's Odyssey by Gwen Cooper or A Cat Named Squeeky by Vic Reskovic
Pinecones – Dewey: There's a Cat in My Library by Vicki Myron
September – The Lost Summer of Louisa May Alcott by Kelly O'Connor McNees
Bonus – Wench: A Novel by Dolen Perkins-Valdez
The Outside Boy by Jeanine Cummins
Splinters – The Water Seeker by Kimberly Willis Holt
Pinecones – Keeper by Kathi Appelt