When M L Malcolm agreed to visit southwest Louisiana, we were excited and wanted to share with the public and many thanks go to the Calcasieu Parish Public Library for helping us to host this public book club meeting. 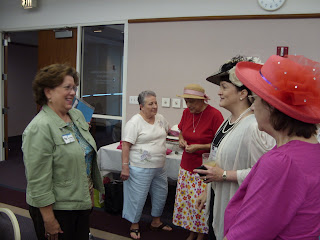 As M L began to speak to our full house, I knew I was going to learn so much more about that time period in history when Jews fled Hungary in anticipation of Hitler's purging.  She spoke from the heart about members of her husband's family who had been part of this flight.  She talked of forged visas and transit papers that allowed them to travel the trans-siberia railway to arrive in Shanghai and begin a new life and a new identity.  Shanghai at this period of time allowed free entry and many arrived.  There they found a very different life in the international community of Shanghai, a place set apart from the rest of China. 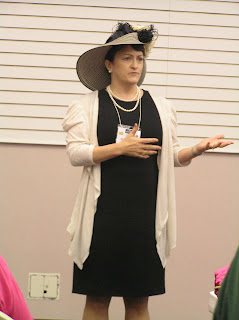 Her book, Heart of Lies, is historically accurate and contains many episodes based on real life events such as the counterfeiting scheme that Leo Hoffman, the main character of the book, unwittingly aids.  While abetting this scheme Leo meets the love of his life Martha and determines to bring her to Shanghai.  In Shanghai they live a royal life of ease until the stock market crash and Leo loses his fortune.  Then Leo makes a determined choice not tell his wife Martha of the loss and enters into a shady relationship with the crime boss.  Leo's life is one of ups and downs, quick choices that he is pressured to make due to war time events.

Definitely a great read and I am looking forward to the sequel to come out Spring of 2011. 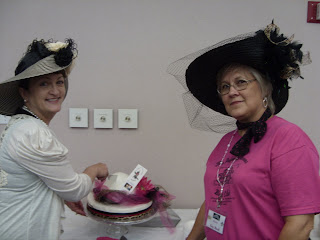 As part of the event, we had a Fabulous Hat Contest and I won!  Thanks for the beautiful fleur de lis bookends to keep my Pulpwood Queens books in order.

We look forward to seeing ML at the  Pulpwood Queens Girlfriends Weekend in Jan 2011! 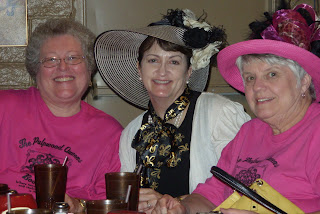 Following the meeting we adjourned to Chastain's where a good time was had by all as you can see from this great big beautiful smile of ML, Linda and Beverly.