Joseph Marshall III - "We Have Seen His Courage"

Oh my did we learn a bunch about Native American culture, specifically the Lakota's through Joseph Marshall's book The Lakota Way.  And then when we visited him via SKYPE at our meeting we appreciated their culture even more.  Our discussion revolved around the necessity of maintaining the Lakota culture and language.  Marshall is working on a project to record audio books in his native Lakota language.  A massive undertaking but after reading his books, it will enrich our world community to preserve this heritage.

We encourage other book clubs or individuals to read his books.  He  even has one on Keep Going: The Art of Perserverance that is dedicated to the survivors of Hurricane Katrina.  We'd love to have him come to our area for a visit.  Perhaps he will.  I know he will be glad to SKYPE with other clubs, just contact him through his website.  Joseph Marshall III  Many thanks for sharing of your life with us Joe, and We too have seen Your courage in dedicating your life to being a caretaker of the spiritual life of the Lakotas.
Posted by Kay Huck at 11:09 AM

What Difference Do It Make? By Ron Hall, Denver Moore, & Lynn Vincent


February – The Mighty Queens of Freeville: A Mother, a Daughter, and a Town that Raised Them
Bonus - Saving Cicadas by Nicole Seitz
Sweet By and By by Todd Johnson

The Girl Who Chased the Moon: A Novel by Sarah Addison Allen
Splinters - The Cupcake Queen by Heather Hepler
Pinecones: Evolution of Calpurnia Tate by Jacqueline Kelly 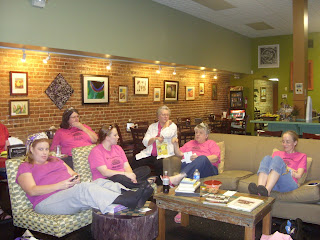 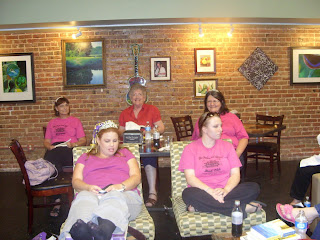 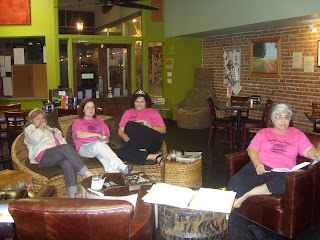 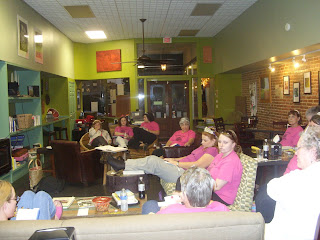 Another wonderful meeting was held in October and this time at Stellar Beans in downtown Lake Charles.  Val Noland Smith, the owner, was most accommodating and the setup and food was terrific. Thanks Queen Lea for coordinating this for us.

It was great to chat with author Todd Johnson about his book Sweet By and By as he shivered in the first snowfall of Connecticut and we were fanning ourselves from the heat.  Sweet By and By is an absolute must read for caregivers for the elderly.  His book was about the dignity of each person and about having compassion for others.  His agent has just sent 200 copies to a meeting of geriatric nurse practitioners. A great book Todd and we look forward to meeting you in Jefferson Texas in January!
Posted by Kay Huck at 9:22 PM


I'm sure many of you know Dr. Linda LeBert-Corbello, she has published a book In The shadow of My Brother's Cold Blood and will be doing a presentation and book signing on Nov 11 at 6 pm at the Calcasieu Parish Library.
Let's try to go to support our local authors!    I think her story will be captivating.  Can you imagine being the brother of the one who murdered in cold blood and had to live with that for the rest of your life!
My name is Dr. Linda LeBert-Corbello.  I will present a short powerpoint on the family members featured in the original story :  IN COLD BLOOD.   I will also be signing copies of my book entitled IN THE SHADOW OF MY BROTHER'S COLD BLOOD on November 11, 2010 at Calcasieu Parish Library inLake Charles at 6 PM.
My book is DIRECTLY connected to Truman Capote's work:  IN COLD BLOOD.
Thank you,
Linda LeBert-Corbello,PhD
PUBLIC INVITED
IN THE SHADOW OF MY BROTHER'S COLD BLOOD
Written by Dr. Linda LeBert-Corbello
Read the life story of
Walter David Hickock  (DAVE)
(Brother of murderer  the book IN COLD BLOOD by Truman Capote)
Calcasieu Parish Library   6 pm November 11, 2010

Lea is on the ball and has already made arrangements with Stellar Beans for our meeting on October 27th.   You need to respond to Lea  ASAP and no later than Mon October 25.

- Great arrangements Lea! Lots of Choices! And all for  $8.50, we will be the only customers.  They are opening just for us, they have wi-fi available (included with the meal price) big screen TV so we will be able to SKYPE with author Todd Johnson.
These will be guaranteed reservations so if for some reason you can't come you will still have to pay.  Likewise if you just show up without a reservation there will not be any food prepared for you.
Your choices are listed below  --
Kay,
I have made the arrangements with Stellar Beans.  The cost will be $8.50 per person, includes sandwich, chips (assortment choice), drink (choice), dessert (cookie/brownie).
Each person can custom order their sandwich using the form below ---I need back to me no later than Monday, October 25, email or phone to me.  Please send to all our members.
Pulpwood Queens Book Club Meeting       Wed.,October 27, 2010   5:30 to 8:00 P. M.
NAME:________________________________________________
Sandwich Combo - $8.50  (Sandwich, Drink, Chips, Cookie/Brownie)
Need your sandwich order no later than Monday, October 25.  eadurio@bellsouth.net or 526-7335, leave message.

Click thru  www.swlapulpwoodqueens.blogspot.com  to purchase at Amazon.com.  All commissions are donated to Abrazando Cristo Mission to Nicaragua by the Southwest Louisiana Pulpwood Queens Book Club.  Our donations are personally delivered by one of our members and her family who participate in the annual mission trip. This simple click thru generated $55 last year and purchased books for the orphanage.  Thank you!